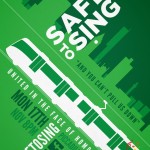 Our most wide-reaching project to date is the Safe to Sing campaign, which was set up following a horrific homophobic attack on two young men singing songs from the musical 'Wicked' on the Manchester trams, which occurred on November 1st 2014.

In the 16 days following the attack, spearheaded by our Co-Chair Kath Pierce (formerly Fox), the campaign was created as a positive way to fight back against homophobia and reclaim Manchester city centre as a safe space for LGBT+ people to go about their daily lives freely without persecution. The campaign had the full backing of Manchester City Council, Transport for Greater Manchester, Greater Manchester Police and Metrolink.

On the night of 17th November, MLGC took to the trams to sing defiantly and joyfully and the journey culminated in joining together with other LGBT+ and non-LGBT+ choirs and members of the public to sing in Piccadilly Gardens.

The event and campaign were a huge success. We were joined by hundreds of people from far and wide who wanted to show their support on a rainy November evening in Manchester. Some made "Cake Not Hate" cakes to give out to the crowd. Jacquie, the mother of one of the young men hurt in the attack, came to thank the choir for supporting her son and his friend.

Reporters from The Guardian, Radio Five Live and Manchester Evening News travelled with us on the trams and MLGC featured in the national and international press in the following days. The Twitter campaign #SafeToSing officially trended with 540,000 uses worldwide.

The response to the campaign was phenomenal. It inspired many other people (schools, charities, entrepreneurs, artists) whilst keeping the subject of homophobia in the news for three whole weeks. It culminated in two arrests and the perpetrators of the abuse on the tram were charged in May, with their sentences to be decided in September.

The choir was nominated and shortlisted for numerous awards, including a National Diversity Award for the Safe to Sing campaign. We won a Spirit of Manchester Award for Most Successful Campaign, and were Runner Up in the Equalities Award category. MLGC were also finalists in the Community Force category at Manchester City Council's Be Proud Awards in early December 2015. Our co-Chair Kath Pierce (Fox) was nominated for an LGBT Foundation Heroes Award as LGBT Role Model of the Year in 2016 for her work on the campaign and in raising the profile of MLGC.

The Safe to Sing Facebook page has a strong following and this will continue to be developed as a place for campaigning and awareness of LGBT+ rights and wellbeing:

Since 2015, Kath Pierce has completed a Masters enterprise degree at Manchester Business School, focusing on LGBT+ visibility in business and entrepreneurship. She has gone on to research and create a new social enterprise as the permanent legacy of Safe to Sing.

Inspired by the choir, “Somewhere”, is looking to become a national hub for LGBT+ culture and enterprise, and following a successful prototype in Manchester, it is due to launch soon in Edinburgh. The plan is to build a network of hubs around the country and beyond.