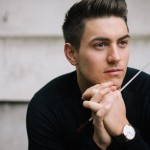 Dan McDwyer is a graduate of the RNCM and an established vocal coach, conductor and arranger. He currently holds the position of Musical Director of several other choirs including Pendleton College Contemporary Choir, the Xaverian Chamber Choir, Francis House and Manchester City Council Staff Choir and Parrs Wood Harmony Choir, which performed his arrangement of 'My Everything' with Ariana Grande at the One Love Manchester concert. In 2017 Dan set up Manchester Mental Health Choir to support anyone suffering from mental health problems through music and song. He has conducted choirs at most major stadiums and arenas across the UK, leading choirs for the rugby league World Cup and working with choirs for Blue Peter and BBC Children in Need. He has worked on several musical theatre shows as musical director including Phantom of the Opera, Hairspray, Cabaret, Witches of Eastwick and West Side Story in London and Manchester.

During his time at college he performed in several productions, singing solo with the RNCM Big Band and Session Orchestra. Dan has also sung as a soloist at Old Trafford stadium, Cardiff Millennium Stadium for the opening of the Rugby World Cup and on Songs of Praise. Originally trained as an opera singer, Dan is a versatile vocalist and frequently performs as a pop, jazz and musical theatre vocalist.

In response to the aftermath of the attack at Manchester arena in 2017, Dan was asked by Manchester City council to be Musical Director for Manchester Together – With One Voice, which featured MLGC among many other choirs. Dan helped produce the evening and arranged all music for the event, which was broadcast nationally, bringing together a mass choir of 4000 singers from over 100 choirs. Dan has recently produced choir arrangements for artists such as Ariana Grande, Katherine Jenkins, Kerry Ellis, The Script, The Blossoms and many more.